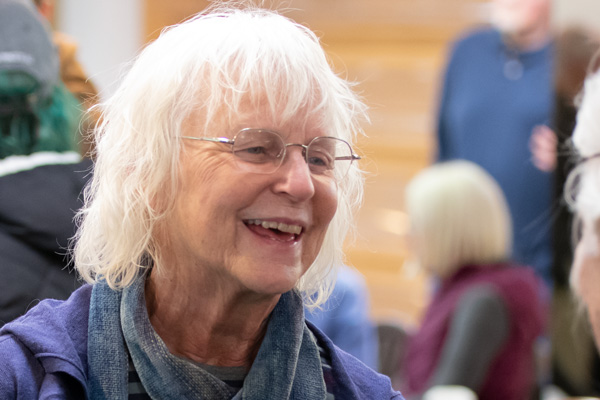 I was married to Jim Olson (we all called him Ole in those days) at the time, who had launched an environmental law firm in 1972 along with Mike Dettmer. Jim was in touch with some experts who thought that squishing these spent fuel rods closer together was a bad idea and there were some other activists in the area who were sounding the alarm as well. So, when the 4 of us women got together around that table—Martha Phillips, Charlene Goral, Judith McClellan, and me—we began to discuss what we could do to help discern if this plan would be safe. Jim suggested that we organize a fundraiser to help with the costs of bringing in some unbiased experts to testify in the hearings to determine the safety of moving the spent fuel rods closer together. Consumer’s Power had hired their own experts that we doubted were coming from a neutral position.

We organized an art auction, complete with a cakewalk for mid-July. We rented the big barn at the Civic Center that has since been torn down; we made a list of local artists and contacted them to ask for donations of pieces of art, made flyers, and recruited some of our friends to help. Unfortunately, it was a gorgeous, hot day, the barn was about 100 degrees inside and most people were at the beach. The organizing committee bought a lot of art that day and went home with a few cakes! And yet, a small but enthusiastic crowd gathered and by the end of the day we had 40 members of NMEAC. We broke even on the event so weren’t able to help with the expert witness costs. Still, NMEAC was launched and we had gotten good publicity.

Gradually we learned how to run an organization, learning by the seat of our pants. I was a teacher by training and had no experience with running a nonprofit organization. Neither did the other women. We found kindred spirits who agreed to be on the Board of Directors and Ole had worked with nonprofits so, little by little we learned about making agendas, running meetings, fundraising, publicity (pre-Internet, of course), recruiting members and prioritizing our focus. People who I remember showing up and getting involved were Rob Chapman, Tim Johnson, Mary (Clark) Van Valin, Mary Anne Macy, Sally Neal, Reni Dengel, and Mary Eschbach, Rob Bollenberg, Pat and Nancy Curley, Geradine Simkins, Sally Somsel, Grant Parsons and others who I’m forgetting right now but who are no less important.

There was no lack of issues! Early on, we were part of a coalition to protect the Sand Lakes Quiet Area from oil drilling, helped to set up a recycling program for used oil, launched Household Hazardous Waste Collection Days, worked to fundraise for bike paths and sponsored lots of educational programs on water, forest protection, recycling and more. Part of our educational efforts included putting on skits for school kids, one on recycling; another, The Lorax, performed by kids, down at the Open Space. By the mid-’80s, NMEAC got involved with the campaign to stop the Bayview Mall from being built between the downtown stores and the Parkway! That put NMEAC on the map!

NMEAC members showed up for hearings on various environmental topics. One of the most memorable for me was a hearing with the GT County Commissioners about the GWEN Towers. The Ground Wave Emergency Network was some hare-brained idea for the Federal Government to be able to communicate after a nuclear war from their underground bunkers, while the rest of us suffered the effects. We were proposing that the Commission adopt a resolution opposing GWEN. It was part of a nationwide effort to block this inane idea. When it was my turn to speak, I began to talk about the threat of nuclear war and all the other, more important measures we could take to prevent nuclear war. As I got into it, I felt tears rising in my eyes, my throat tightened up, and I began to weep. Now, those of you who know me well will not be surprised as I tend to express my deep emotions through tears. Eventually, I pulled it together and finished. The commissioners looked pretty sympathetic. They passed the resolution.

Another memory that sticks with me is the first Household Hazardous Waste Day. Bob Russell was on the scene by then; he and Tim Johnson masterminded this event. They talked Dow Chemical into sending up a big truck and taking away all the hazardous waste to their incinerator. Now, we knew that incineration was not a longterm solution. However, at the time people were just dumping all kinds of dangerous chemicals out in the back 40, or in their backyards, or in the garbage where they ended up in landfills. NMEAC was part of the Michigan Toxic Dumpsite Coalition so we knew how widespread contamination was from leaking landfills. (We also helped to organize a number of  MTDC conferences and became good friends with some of the activists around the state. This is when we met the inimitable Ben Drake, who worked for the Environmental Defense Fund at the time, and subsequently became a longtime NREC board member.) Anyway, back to the Hazardous Waste Day: we were ill-prepared for how much toxic material was dropped off. We were handling all kinds of stuff that we probably shouldn’t have been, with flimsy masks and thin gloves. Eventually, these sorts of drop-off days were taken over by local government and now I think they are run by trained professionals. But, at least we raised awareness about the problem and there were no mishaps.

Personally, during the time that we formed NMEAC, I was a mother of 3 children, the youngest of which was 2 years old at the time; Ole and I had purchased and moved into the Neahtwanta Inn, on the Old Mission Peninsula, and we were involved with renovating it and figuring out how to make it work financially. Then in the early 80’s, Ole and I ended our marriage (but are still good friends and collaborators) and I subsequently married Bob Russell, another activist, who jumped in to help with NMEAC.

In 1987, Bob and I launched the Neahtawanta Research and Education Center, NREC, because we wanted to broaden our scope to include nonviolence, peace, human rights/equity issues, and the concept of the interconnectedness of all life. NREC and NMEAC worked hand in hand through the years until 2019 when NREC ended its existence and ceded its assets to a new organization, Title Track, where I serve as a board member.

Over these years, since 1980, it was NMEAC that has been and still is, a constant presence, speaking up to protect the environment. A grassroots organization in the truest sense; led by activists who dedicated their lives to this cause, not seeking salaries or fame, just doing the necessary work that needed, and still needs to be done. It is an honor to have been there in the very beginning and I hold in the highest esteem those who carried the work on: Ken Smith, Greg Reisig, and Ann Rogers led the way; the lawyers, Jim Olson, Mike Dettmer, Grant Parsons, and Bill Rastetter, jumped in when needed. Sally Somsel, Sandi McArthur, and Jeff Anderson were volunteers extraordinaire. There are so many others, too many to mention.

I am humbled to be remembered as one of the founders of NMEAC. I played a small role in the whole scheme of things. My deepest admiration and gratitude are held for Greg Reisig, Ann Rogers, and June Thaden, who have worked tirelessly and are still committed to continuing the daily work to keep NMEAC going.

I will close with a tribute to the Grandfather of NMEAC: Clarence Kroupa. He joined up early on and was a loyal and consistent presence at our meetings, gatherings, and celebrations. Bob and I formed a deep friendship with him. I cherish the memory of our talks on the porch at the Inn; he would drive out with a bushel of pears and a bunch of articles and newsletters to discuss. His legacy lives on.